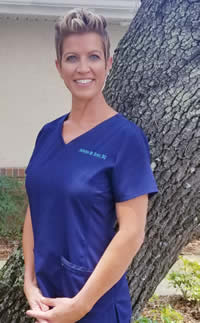 Autumn M. Scaz, DC, received her Doctorate of Chiropractic from Life University in 2000.  Since becoming a board certified Chiropractic Physician, she has had held a license in the state of Florida, as well as, the state of Tennessee. Prior to moving to Tampa in 2012, Dr. Scaz practiced in her home town of Sarasota, FL, with her practice focusing on family care, as well as spinal correction and rehabilitation.

While her parents introduced her to chiropractic at a young age, it was during her undergraduate studies at Stetson University that she experienced the true power of what chiropractic adjustment could accomplish. Majoring in Piano Performance and minoring in Exercise Science, she sought out chiropractic care to help with headaches caused by tension in the neck and shoulders due to several hours of daily piano practice.  After several months of treatments she realized that, through chiropractic adjustments, she was unexpectedly free from another condition that she had suffered from since childhood, asthma.  It was then that she decided to pursue a career in Chiropractic.

When asked what the most enjoyable aspect of being a chiropractor was to her, she replied “second to physically adjusting patients, I love to educate people on the anatomy of the human body”.  Because of this passion for education, she has enjoyed teaching several semesters in the Nursing and Physical Therapy programs at Keiser University stating “I taught as an adjunct educator, meaning I taught classes at night, and my students consisted primarily of working adults who were going back to school for an education to better themselves, their lives and the lives of their families”.

Dr. Scaz is privileged and excited to be a part of Sheldon Road Chiropractic and Massage Therapy, where they continue to offer the latest treatment options and the highest quality of care.